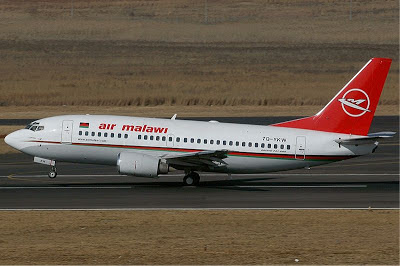 It has created a new company, Air Malawi (2012) which will soon pick a investor to help recapitalise the flag carrier.
“The government has embarked on a process of restructuring Air Malawi primarily involving the engagement of a strategic equity partner to recapitalise the airline,” Jimmy Lipunga, chief executive officer of the country's Privatisation Commission, said in a statement.
So far 11 local and international companies, including Ethiopian Airlines, South Africa's Comair and Botswana's Global Business Network, have expressed interest in partnering with the airline.
Air Malawi is saddled with a debt of over $50 million, according to airline sources, arising mainly from the grounding of two of its four aircrafts.
The government will settle all of the company's debts.
Two Air Malawi Boeing 737 aircraft have been parked at a maintenance hangar in South Africa for three years after the airline failed to pay for repairs and storage fees.
The carrier has had to fly leased aircraft at “enormous cost and reduced frequency on the profitable routes” within the country and in the region.
The airline is one of dozens loss-making parastatals in Malawi.
Half of the country's 67 parastatals have been sold to private investors.