Budget airline says it will begin services once it solves the financial crisis which flew it to a halt. 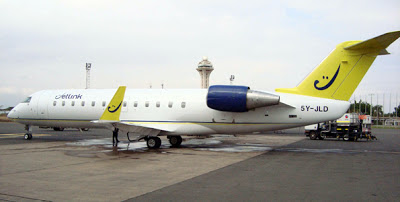 It will take about four months before Jetlink Express, the budget airline which grounded its fleet on Thursday returns to business. And that will only be realised if the firm resolves the financial crisis which left it unable to pay operation costs.


On Thursday, Jetlink Express announced suspension of operations for all scheduled flights as it was unable to access over $2 million (Sh171 million) held in South Sudan due to foreign currency crunch that has hit Juba.
“From briefing we had yesterday (Thursday), we understand the North has more or less agreed to facilitate oil into South Sudan. We may resume in four months or so, when currency inefficiency will be a matter of the past,” Jetlink commercial manager Ephraim Kamonjo toldNation at the firm’s head office in Nairobi. The Juba route has been the carrier’s biggest revenue stream accounting for over 60 per cent of its earnings.
South Sudan is grappling with a severe foreign exchange shortage at the moment after it stopped exporting oil — its largest forex earner — during a spat with Khartoum over oil-transit fees. The World Bank had projected that Juba’s dollar reserve would run out by August.
However, South Sudan is hoping that a recent deal with the north would allow oil to start flowing soon again, ending the dollar crunch.
Meanwhile, the carrier’s 350 employees will remain on leave as the company seeks a solution to the crisis.
source: Daily Nation.