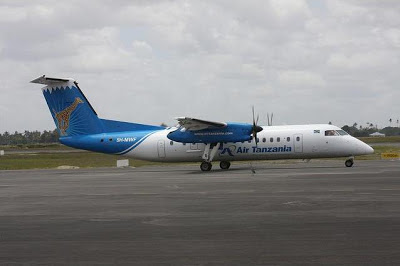 An ATCL Dash 8, Q300 5H-MWF (c/n 474) enroute from Kigoma, western town of Tanzania to Dar es Salaam (Tanzania) with 25 people on board, had to make an air-turn back when one of the windshield windows developed crack about 30 minutes after it took off from TKQ on Friday. The crew did a safe landing at Kigoma airport (TKQ).

According to a local TV station, ITV, the incidence has been confirmed by the Acting Executive Director of ATCL, Captain Milton Lazaro, while urging travelers not to worry as this is a normal problem that can occur to any other aircraft.

He said arrangements were underway to ensure that passengers who were traveling with their plane get another aircraft to transport them to Dar es Salaam, and that until yesterday the solution would have been obtained.

The plane, fresh from major check-C repairs was on its first flight in the region, 10 months after the airline’s other aircraft crashed in the same region.

In April last year another ATCL Dash 8 Q 300 5H- MWG crashed and was damaged beyond repair after a runway overrun in Kigoma airport, whereby the wreckages of MWG still present at the area.