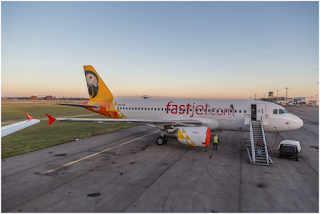 According to a report on Business Day, glitches in the airline’s website led the airline to move its highly anticipated launch in late May back by a month.


Kayle Haywood, CEO of Fastjet South Africa told Routes News that the airline was making final preparations for the launch.”We are just working on some further enhancements to the distribution system for the product in the country and the web. We decided to upgrade certain elements of that so that it is a stronger proposition from day one,” Haywood said.
However, evidence suggests that the airline’s launch in the country was postponed due to a failure to comply with regulations from the Department of Transport.  Earlier this month, Tourism Update reported that the airline had failed to obtain permission to fly in the country from the Department of Transport. Andries Ntjane, deputy director at the department  stated that for Fastjet Holdings, in which Fastjet has a 25% stake, for the airline hit local skies it needed to apply to have the name changed with the DoT.
After failing to reach an agreement with the DoT on the issue, the airline then forged a partnership with Federal Air —a local air charter services company.  The airline company is hoping to launch its local low cost service under Federal Air’s licence through a six-month wet-lease of a B737-300 from Star Air Cargo, a leasing company based in Johannesburg. According to Fastjet ,the revenue generated during  the six-month period will go through Federal Air’s bank accounts and a portion will be passed on to fastjet Holdings. The airline is hoping to obtain long-term licence to operate in South Africa.
Fastjet’s South African launch has been dogged by controversy since announcing its intentions to take over the Johannesburg-Cape Town route by resuscitating the now-defunct airline 1time, last year.  Six months ago,  the airline faced a claim amounting to over R12 million from Tanzanian authorities for not paying taxes for close to a year. Partnering with local businessman Edward Zuma, a controversial figure in the local business circles has also raised a few eyebrows. Zuma, who refused to pay the company that managed his grand wedding at Tala Game Reserve a year ago , and local investor Yusuf Kajee’s company Blockbuster owns 75% while Fastjet owns 25% of the operation.
source: getaway.co.za