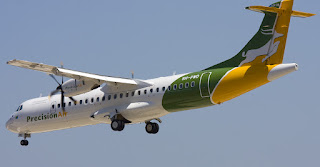 Following the story published in The Daily News paper ISSN 0856-3812 dated 3rd May 2013 (ZRZ pins Precision Air over 3.4bn/- unpaid taxes) quoting from a letter sent from the Zanzibar Revenue Board (ZRB) to Precision Air Services Plc in which it recorded the ZRB’s instructions to “restrain departure of all flights operated by Precision Air Services, as well as closure of its offices”, Precision Air has the following statement to make.
Speaking at its HQ Precision Air Services MD and CEO, Ms. Sauda Rajab, released a statement to clarify the situation at hand and reassured the public of continued operations in Zanzibar.
“We wish to notify our passengers and the Tanzania Nation at large that your Airline is still in full operation of its route to Zanzibar. Neither The Zanzibar Revenue Board (ZRB) nor the Airport authorities have refused our fleet from touching ground in the Spice Isles” commented Ms. Sauda Rajab, CEO and MD of Precision Air.
She further confirms that the Zanzibar Revenue Board had raised concerns which were discussed by both parties in a meeting held on Monday 29th April 2013 which resulted to mutual agreement. PW is also said to be receiving full support and cooperation from ZRB. “This simply has been a matter of miscommunication between parties but we are delighted that after our discussion our offices are in deed open for business and we welcome you all to continue with your travel plans. We couldn’t be in a better working relationship with ZRB as we are today.”

As declared in the statement dated 3rd May 2013 and published in the company’s website, Precision Air promises to continue maintaining to be the safest and competitive Airline of Choice in the country in providing need based transportation services and equipment to all areas in Tanzania and beyond.

Precision air is the only airline in Tanzania listed on DSE and earlier this year was listed for the first time as Superbrand in East Africa. Precision Air has the largest network than any other airline in Tanzania with operational stations in 18 destinations within and outside Tanzania with Dar es Salaam being its hub and now developing Mwanza as its second hub. Over the past year, the Airline added 2aircrafts (2 ATR 45-600) bringing the fleet to 9ATRs and 2boeings.