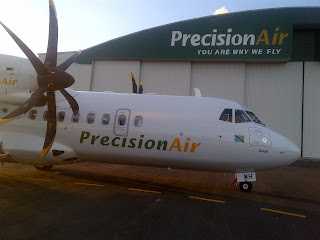 The awards Program was created in 2000 to recognize and show appreciation to the travel professionals and media who have worked hard promoting and selling Tanzania in the US market, as well as to provide an incentive to increase the numbers even more in the coming years.

With this award it seems Precision Air continues to be Tanzania's premier airline. Earlier last month, PW was voted Tanzania's 2013 Best Domestic Scheduled Airline by Tanzania Society of Travel Agents (TASOTA). This is the 4th time that the Airline has earned the title that comes as no surprise due to it’s notable dominance in the Aviation industry in the market as a successful and aggressive local Airline. PW began its four consecutive wins in 2004 followed by uncontested winning in 2008, 2011 and now 2013.

It is also to be remembered that not too long ago the Airline received the award for Top 20 Tanzanian Consumer Superbrands for 2012/2013, compiled by London-based The Centre for Brands Analysis. This rating recognized PW’s strong growth and indisputable brand recognition, and cements even further its position as the preferred regional airline with the most destinations and frequencies in Tanzania.

As the largest ATR operator in Africa, with PW, Tanzania regions are no longer worlds apart. The Airline continues to spearheaded regional transport breakthrough ahead of other players. ATRs have the ability to land on small Airports and have become a catalyst for PW to spread its wings widely in remote parts of the country.

Aviationtz blog congratulates the management and all staff at PW for the achievement.