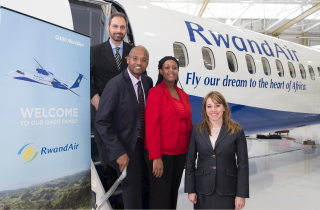 Bombardier Aerospace and RwandAir of Kigali, Rwanda Yesterday (February 27)  celebrated the delivery of a dual-class Q400 NextGen turboprop airliner to the African airline..


Jean Paul Nyirubutama, Deputy Chief Executive Officer, RwandAir, accepted the aircraft during a delivery ceremony at Bombardier’s Toronto site where the Q400 NextGen aircraft is manufactured. The ceremony was attended by Bombardier Commercial Aircraft executives and many of the employees involved in the production of the aircraft.

“We have been eagerly awaiting the delivery of this superb dual-class, 67-seat aircraft,” said Mr. Nyirubutama. “By offering similar cabin amenities on the Q400 NextGen aircraft and on our recently acquired dual-class Bombardier CRJ900 NextGen regional jets, the two complementary aircraft types will provide seamless passenger service, permitting us to align our total fleet strategy towards a unified passenger experience.

“The Q400 NextGen aircraft will position us well to offer increased capacity on popular routes that have been opened and serviced with our 37-seat Bombardier Dash 8-200 aircraft and is the right aircraft to develop our growing domestic and regional markets. The Q400 NextGen aircraft’s modern cabin and superior performance will also help us build new markets where regional air service today is served by older-generation jets. The aircraft will firmly support RwandAir on our path towards growth and increased profitability,” added Mr. Nyirubutama.

“The Q400 NextGen turboprop has proven its capability, flexibility and ruggedness in many regions of the world and is operating with distinction in diverse environments. We are confident that it will serve RwandAir and its customers very well,” said Mike Arcamone, President, Bombardier Commercial Aircraft. “As one of our newest and fast-growing customers, RwandAir is serving Africa’s expanding domestic and international markets and we are delighted that another Bombardier aircraft will be used to further develop the airline’s network of short- and medium-haul destinations.”

About RwandAir
Operating from Kigali as its hub in the heart of Africa, RwandAir is the fastest growing airline on the African continent. RwandAir's fleet currently consists of four Boeing 737 series aircraft and one Bombardier Dash 8-200 turboprop. Two brand new Bombardier CRJ900 NextGen regional jets arrived in November 2012.

About Bombardier
Bombardier is the world's only manufacturer of both planes and trains. Looking far ahead while delivering today, Bombardier is evolving mobility worldwide by answering the call for more efficient, sustainable and enjoyable transportation everywhere. Our vehicles, services and, most of all, our employees are what make us a global leader in transportation.

Bombardier is headquartered in Montréal, Canada. Our shares are traded on the Toronto Stock Exchange (BBD) and we are listed on the Dow Jones Sustainability World and North America Indexes. In the fiscal year ended December 31, 2013, we posted revenues of $18.2 billion.