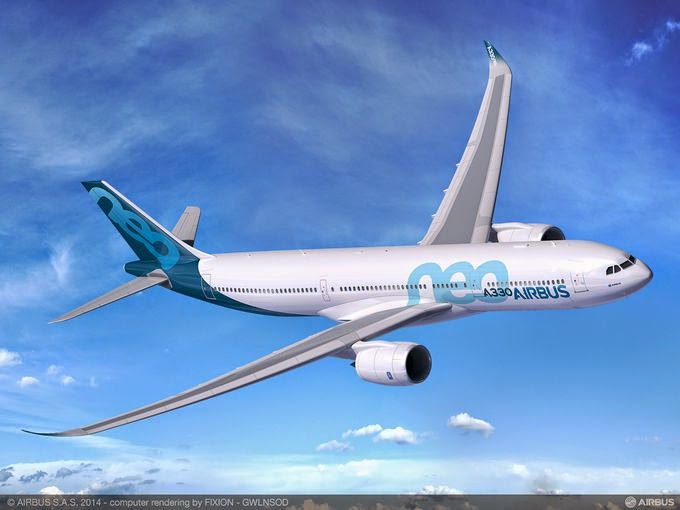 Following a decision by the Board of Directors of the Group, Airbus has launched the A330-800neo and A330-900neo, two new members of its Widebody Family, which will incorporate latest generation Rolls-Royce Trent 7000 engines, aerodynamic enhancements and new cabin features. Benefitting from the unbeatable economics, versatility and high reliability of the A330, the A330neo reduces fuel consumption by 14% per seat, making it the most cost efficient, medium range Widebody aircraft on the market. In addition to greater fuel savings, A330neo operators will benefit from a range increase of up to 400 nautical miles and all the operational commonality advantages of the Airbus Family. Deliveries of the A330neo will start in Q4 2017.
“The A330 is a very important margin contributor for our Group. It’s also one of the most reliable and efficient commercial aircraft ever. Customers love it. With our decision to re-engine the plane, we will keep the A330 flying high for many more years to come. The development costs for the A330neo will be incurred from 2015 to 2017 with an impact of around -70 basis points on Airbus Group’s 2015 Return on Sales target. However, we have a very good business case and the A330neo, once in service, will continue to significantly contribute to our group’s earnings,” said Tom Enders, CEO of Airbus Group.
“The A330neo is the logical evolution of our reliable and versatile A330 Family. It provides an optimal solution for airlines around the world looking to minimise their fuel and operating costs while offering best-in-class comfort to their passengers,” said Fabrice Brégier, Airbus President and CEO. “We see strong market potential for the A330neo, and like its market-leading smaller sister, the A320neo, we are confident this new aircraft will be a success in the medium-haul segment. We are again leveraging a proven aircraft with a wide operator base and making it even more efficient with the latest innovations and technology developments.”
In addition to the new Rolls-Royce Trent 7000 engines, the A330neo will feature incremental innovations, including aerodynamic enhancements such as new A350 XWB inspired winglets, an increased wing span and new engine pylons. Pilots will benefit from latest generation cockpit systems, and the already very comfortable A330 cabin will be further optimised to offer up to ten additional 18 inch wide seats. Passengers are winners too, as they will be able to enjoy a 21st century on-board experience with for example, fourth generation In Flight Entertainment (3D films), mood-lighting and full connectivity.