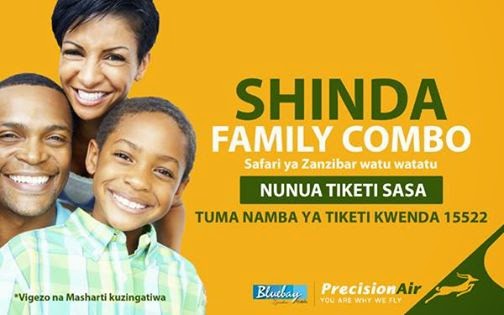 PRECISION Air (PW), the locally owned airline has allocated over 100m/- for a consumer driven promotion to reward its loyal customers who have been tirelessly supporting efforts and success of the company.

Speaking at the first draw where 10 winners of free tickets were picked, the PW's Manager - Marketing and Corporate Communications, Ms Azda Nkullo, said the promotion has been a significant incentive to both the present and potential passengers to fly with the airline.

"The promotion has drawn the attention of more customers and retained the present ones to make PW their first choice airline to fly with in Tanzania," she told a news conference held in Dar es Salaam.
She said through the promotion christened 'Family Combo Reward', customers stand a chance to win free tickets in weekly raffles where ten tickets will be available for grabs by the draw winners.

Ms Nkullo unveiled further that, "the campaign will run for three months whereas the grand raffle will be conducted at the end of February."

At the final draw, the grand prize winners will fly to Zanzibar for two days vacation at one of the beautiful tourist hotels, which is an official partner on accommodation for the Precision Air Family Combo promotion.

PW is currently flying in ten local and international destinations and it looks forward to expanding its network to become a truly regional airline while upholding its principles on offering its customers quick, comfortable and reliable service as the best way to serve its customers.

As the Dar es Salaam Stock Exchange (DSE) listed domestic airline, PW came into existence some 21 years ago as a charter airline and has steadily grown to become a reputable airline in Tanzania, East and Central Africa at large.

Witnessing the draw, an executive with the Tanzania Gaming Board, Mr Abdallah Hemed, urged people to participate with confidence as the promotion has adhered to all the rules and customer rights required by the gaming board.