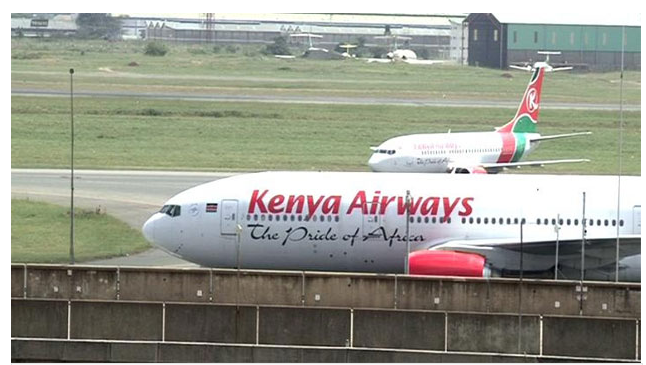 News on the media report that Kenya Airways (KQ) is in deep financial crisis, with reports from Nairobi suggesting that the airline may be broke.

The Daily Nation reports that, Cash-strapped Kenya Airways has turned to debt to pay its workforce as the national carrier flies under the weight of liquidity flow problems that have seen its debt burden hit Sh70 billion.

Chief executive officer Mbuvi Ngunze said the airline was experiencing tough financial times that had left it with no option but to rely on debt to sustain its nearly 4,000 workforce.

“...So how am I paying my staff? I am paying them through debt,” Mr Ngunze said when he appeared on Citizen Television’s Business Centre show on Wednesday night.

The national carrier has been going through turbulent times since booking a Sh10.45 billion after-tax loss for the six months to September last year.

It blamed the performance on dampened passenger numbers due to the suspension of flights to Ebola-hit Sierra Leone and Liberia and insecurity at the Kenyan Coast.

On another development KQ has denied claims of any cancellation of flights despite a go-slow by its pilots.

KQ Head of Communication Wanjiku Mugo told Capital FM Business that they have been experiencing some delays owing to the go-slow that has affected scheduled flights.
Mugo said the airline is still in talks with the Kenya Airline Pilots Association (KALPA) to have the dispute resolved as soon as possible.
The airline issued 10 pilots with a six-month notice saying this was part of an ongoing fleet modernisation exercise saying that the pilots are all aged above 60 and are nearing retirement which KALPA has challenged.
KALPA Secretary General Captain Ronald Karauri says the association is aggrieved by the manner in which KQ issued the notice adding that it was sudden despite the talks that were ongoing between the two parties on the matter.
“You know before they issued the letters, we were discussing. So they did it unilaterally; they suddenly just issued letters. Some pilots were even on flights coming back, only to find letters,” he says.
Karauri says the two parties are meeting with the Ministry of Labour on Tuesday next week to have the matter resolved.
However Kenya Airways has maintained that it is not sacking the pilots but sending them home on retirement.
KQ says the senior pilots – all between ages of 62 and 65 – have been employed by the airline for several decades and are expected to retire with full benefits.
KALPA on the other hand argues that some of those being retired are not yet of age.
The move by the airline which made a net loss of Sh10.4 billion in the half year ended September 2014 is seen as one of the measures to cut its cost.
The firm spent Sh15.3 billion on its staff for full year ending March 2014 up 18.3 percent compared to Sh12.9 billion in the previous year.
Sources: The Citizen, Daily Nation, capitalfm