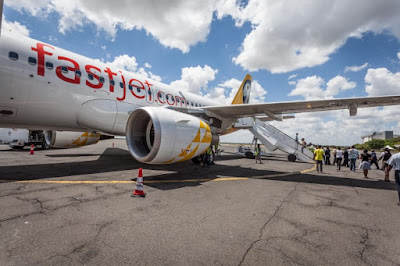 The information from fastjet says that flights will depart Dar es Salaam at 10h25 and land in Lilongwe at 11h05, with a flight time of 1 hours 40 minutes. The return flight to Dar es Salaam departs at 11h40, landing at 14h20 (all local times).

Tickets for flights on the direct route are on sale immediately, with fares starting from US$50 one-way, excluding airport and government taxes with the fastjet promise that the earlier the booking is made, the lower the fare.

“fastjet has been able to expand its international network by working closely with the governments and civil aviation authorities of Tanzania and Malawi, who understand and value the positive impact that low-cost air travel can have on the lives of their citizens and the general economy,” says Jimmy Kibati, fastjet Tanzania’s General Manager for East Africa.

“More affordable fares makes it easier for more entrepreneurs, tourists and other visitors to travel between Tanzania and Malawi which in turn will strengthen the countries’ relationship, boost their tourism and business sectors, and contribute significantly to both countries’ economic growth,” Kibati adds.

Available for purchase on this route will be fastjet’s luggage upgrade option, ‘Freighty’, that allows passengers to transport up to 80kg of checked in bags, as well as fastjet’s ‘Smart Class’ fares which include pre-booked premium seat selection, increased baggage allowance of 32kg and the ability to change flight dates.

The Freighty luggage option in particular is expected to be popular with traders flying with fastjet to purchase wholesale produce internationally to transport back to their home markets to sell.

Bookings can be made online at www.fastjet.com, through any fastjet office, through travel agents or by contacting fastjet’s 24 hour call centre on +255 767 007 903. Payment for tickets can be made with cash, online with a credit card, or through Mpesa and Tigo Pesa.

“The addition of this new international route between Dar es Salaam and Lilongwe to the fastjet network emphasises our vision of becoming a true low-cost pan-African airline, and is evidence of our growing success,” says Kibati.

“Affordable air travel is key to the growth of economies across Africa. It is expensive and time-consuming to build roads to connect cities, inconvenient for people to travel over land, and even if there are existing airlines flying a route, they still exclude the majority of a country’s citizens due to the high cost of those flights.”

fastjet Tanzania already operates domestically from Dar es Salaam to Mwanza, Mbeya and Kilimanjaro, as well as between Kilimanjaro and Mwanza , and internationally between Dar es Salaam and Johannesburg in South Africa, Lusaka in Zambia, Entebbe in Uganda, and Harare in Zimbabwe. fastjet also operates the Kilimanjaro to Entebbe route.