Indonesian plane (Trigana Air) goes missing with 54 people on board

By Stanslaus MAGANGA August 16, 2015
AN INDONESIAN passenger plane carrying 54 people has lost contact with air traffic control while flying in bad weather during a flight in the country’s rugged easternmost province of Papua.
The Trigana Air ATR 42 turboprop plane lost contact in a remote area just before 3pm (0600 GMT) after taking off from Sentani airport in Papua’s capital Jayapura on a flight to Oksibil, the search and rescue agency said on Twitter.

It was travelling to the Papua city of Oksibil.

The plane, which is more than 27 years old, was carrying 44 adults, five children and five crew on the flight which was scheduled to take about 45 minutes, the agency said. It had left Jayapura about half an hour before it disappeared, it added.

The weather was poor near Oksibil, with heavy rain, strong winds and fog, when the plane lost contact with the airport minutes before it was scheduled to land, said Susanto, the head of Indonesia’s National Search and Rescue Agency.

A plane was sent to look for the missing airliner, but the search was later suspended due to darkness and bad weather, said Susanto, who like many Indonesians goes by one name.

Much of Papua is covered with impenetrable jungles and mountains. Some planes that have crashed there in the past have never been found. 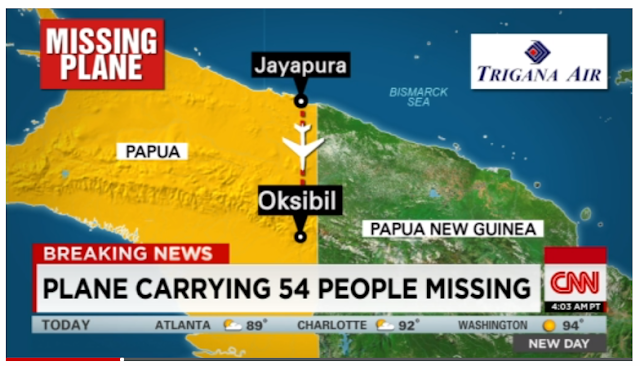 A search for the plane was suspended and will resume Monday morning.

Trigana Air is an Indonesian airline, which is on a list of airlines banned from operating in the European Union.

Trigana Air has had 14 serious incidents since it began operations in 1991, losing 10 aircraft in the process, according to the Aviation Safety Network.

It has been on a European Union blacklist of banned carriers since 2007. All but four of Indonesia's certified airlines are on the list.
Correspondents say Indonesia has a patchy aviation record overall, with two major crashes in the past year.

An Indonesia AirAsia plane crashed in the Java Sea last December while on an international flight from Surabaya to Singapore, killing all 192 people on board.
A military transport plane crashed in a residential area of Medan, Sumatra in July, killing more than 140 people including several on the ground.