By aviationtz September 19, 2016
Air Tanzania Company Limited (ATCL) will not own the two planes recently purchased by the government for a reported $47 million (Sh103.4 billion), it has emerged. 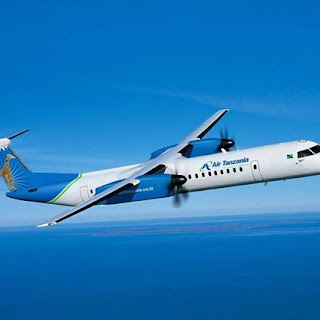 The planes will be owned by the Government Flight Agency (TGFA), which will lease them to ATCL, according to the agency's acting CEO, Mr Raymond Musingi.
The airline will enter into an agreement with TGFA to receive and operate the aircraft in a mutually beneficial business model. ATCL will provide crew, pay for insurance and maintain the planes.
However, Mr Musingi declined to discuss the finer details of TGFA's deal with ATCL.
The first of the 76-seater planes is scheduled to arrive at Julius Nyerere International Airport from Canada tomorrow afternoon. The plane left Canada on Friday and was due to make stopovers in Reykjavík, (Iceland), Southampton, Malta, Luxor and Addis Ababa before landing at JNIA with a crew of four. The second aircraft is expected in the last week of this month, according to government sources.
An advance team left the country two weeks ago to prepare for the aircraft's flight to Tanzania.
The arrival of the planes will lay the ground for improved ATCL operations within the country as the company looks to enter into a competitive era with other local and regional carriers.
The national carrier is saddled with debts said to total over Sh100 billion, and the two new planes will take the number of aircraft in its fleet to three.
The decision to deny ATCL ownership of the planes may suggest that the government is looking at a model that will not put the aircraft at risk should debtors, some of whom have gone to court, come knocking. It is also part of the reason the planes were paid for in full.
The involvement of the TGFA is seen as deliberate measure to keep an eye on the planes bought by the government on condition that ATCL come up with a working business model that will quickly turn around its fortunes.
"We will work closely and provide after-lease support to ensure that the aircraft are operated in a profitable manner to allow the agency to purchase more aircraft and for the ATCL to grow," said Mr Musingi.
The government, which owns 100 per cent of the airline, has indicated in the past that the carrier could be floated for sale to the public at the Dar es Salaam Stock Exchange once it is pulled from the huge debt hole.
President John Magufuli first hinted at the plan to pay for the planes during a joint press conference with his visiting Rwandan counterpart, Mr Paul Kagame. Dr Magufuli promised during his campaign for the presidency last year to ensure that the airline was revived.
President Magufuli has not hidden his admiration for Rwanda's national carrier, RwandAir, which now flies to 18 destinations in Africa and Europe only 14 years since it was established in 2002. RwandAir, which is 99 per cent owned by the government, has eight aircraft, including two Boeing jets.
According to Mr Musingi, the government decided to engage in the business of leasing aircraft to capitalise on a lucrative segment of the aviation industry, which is currently dominated by privately owned Fastjet and Precision Air.
The two new aircraft will take to six the number of planes under TGFA's ownership. The other four aircraft are mostly used to fly government VIPs.
Mr Musingi was optimistic that their joint plan with ATCL would be able to withstand stiff competition and afford travellers more choice and flexibility.
It has yet to be seen what kind of model ATCL will adopt for its operations, coming at a time when local and regional airlines are reporting huge losses and downsizing their businesses.