The announcement was made after a successful test flight to the Kahama airstrip in Shinyanga region.

The test flight performed by Precision Air’s ATR42-500 reg. 5H-PWF took off from Mwanza (MWZ) at around 16:25hrs LT and landed at Kahama (KBH) at 17:00 hrs LT on Sunday 16th July 2017.
Kahama’s District Commissioner, Hon.Fadhili Nkurlu was one of the passengers accompanied the 35min flight from Mwanza.

At Kahama, the flight was received by the management of Acacia, invited guests and the press. Addressing the public, Precision Air’s Corporate Affairs Manager Mr. Hillary Mremi said, Precision Air will start its commercial operations effective from 5th September 2017, initially with three flights a week, every Wednesday, Friday and Sunday and strategically increasing the frequency to daily depending on the demand.

Mr. Mremi said “there will be no need for passengers from Shinyanga and Kahama to drive all the way to Mwanza to catch their flight to Dar es Salaam”.

Flights from Kahama are expected to serve time and the cost of travel for the ordinary citizens and traders as well.

“This will go a long way toward the creation of better connectivity throughout the republic, the growth of our hub in Dar es Salaam and the economy of our country. It is our hope that this flight will be the basis of opening up Kahama to the world”, he said.

Mr. Mremi thanked the government through Kahama’s District Commissioner for their continued support.

On the other hand, the management of Acacia mining celebrates the launching of Precision Air’s flights to Kahama. The mining company said flights at Buzwagi will transform the transport links for over 500,000 people of Kahama. 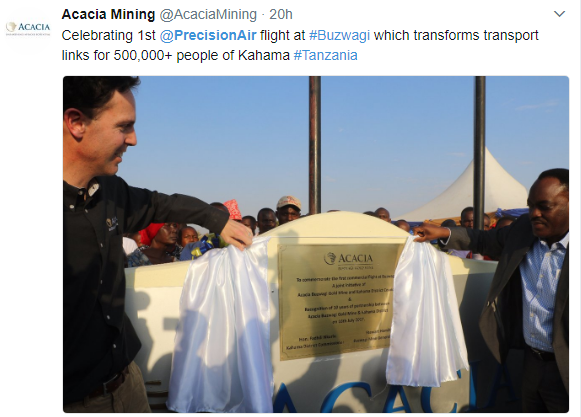 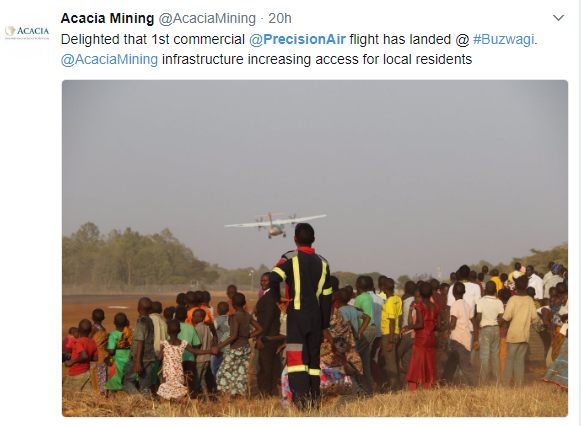 Kahama is a town in northwestern Tanzania. The town serves as the district headquarters of Kahama District. The district is named after the town. Kahama is well known for gold mining.

PrecisionAir is a public listed (DSE: PAL) Tanzanian airline, which is a leader in providing scheduled flight service to over 11 destinations within and outside Tanzania. Operating from its main hub in Dar es Salaam Precision Air flies to Arusha, Kilimanjaro, Mtwara, Kigoma, Tabora, Musoma, Mwanza, Bukoba, Zanzibar and regionally, to Nairobi and Entebbe.

PrecisionAir is a member of International Air Transport Association (IATA) which audits the airline every two years to ensure that it complies with global safety standards, a key factor for all its members. It is the only Tanzanian airline that has passed and attained the IATA Operator Safety Audit (IOSA) certification.