By Stanslaus MAGANGA August 01, 2019
Air France-KLM ordered Airbus SE narrow-body jets worth $5.5 billion and announced the retirement of its A380 superjumbos as Chief Executive Officer Ben Smith reshapes the fleet to cut costs and boost margins.

The group’s French arm will buy 60 A220 planes and placed options for 60 more, according to a statement this Tuesday. The double-decker A380, in its last years of production after a slump in sales, will be phased out by 2022.

“This is a very important next step in Air France’s transformation,” Smith said in the statement, adding that it’ll help the carrier “attain European airline leadership.” He highlighted the A220 aircraft’s performance and comfort.

The Canadian executive, who took over in September, is turning his attention to the fleet requirements that had been put on hold as he focused on labor unrest in his first months in charge. The new, more fuel-efficient planes will help pare operating costs as he remodels the group’s short-haul business to take on network rivals and low-cost competitors including Ryanair Holdings Plc. 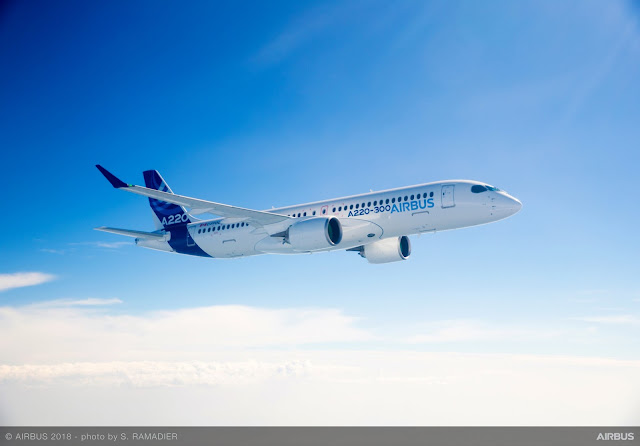 The A220s will replace 51 Airbus A318s and A319s with an average age close to 17 years that operate a significant chunk of Air France’s intra-European operations. Those include Paris-Rome flights and domestic routes where discounters and high-speed trains have been grabbing market share. Delivery of the planes is expected to start in September, 2021.

Smith has already taken steps to bolster short-haul margins with cuts to under-performing services. The A220 model, previously known as the Bombardier C Series, is made in Canada but marketed by Airbus following its takeover of the program last year from Bombardier Inc. The model was designed to take on Airbus’s A320 family of jets and the Boeing Co. 737. The Air France order marks one of the biggest deals yet since the takeover.

The order was unveiled by Air France-KLM ahead of second-quarter results on Wednesday when the carrier is expected to report a drop in operating profit due to higher fuel prices, weaker economies and falling fares.

Air France’s remaining seven superjumbo aircraft will be phased out, including five jets that are owned by the airline. Smith had previously decided to upgrade the cabins of the company’s 10 A380s, despite a decision not to renew leases on three of them.

The A380 consumes 20-25% more fuel per seat than new generation long-haul aircraft, Air France said in its statement. “Increasing aircraft maintenance costs, as well as necessary cabin refurbishments to meet customer expectations reduce the economic attractiveness of Air France’s A380s even further,” it said, adding that keeping the aircraft in the fleet would have involved “significant cosThe carrier’s harsh assessment of the double-decker comes after the manufacturer decided in February to stop making the model after it failed to win broad support from airlines. The decision capped years of speculation about a plane that came to market as a highly-anticipated novelty and fizzled out from lack of sales.

Air France-KLM is considering the much smaller Boeing 787 and Airbus’s A330neo to replace the jets, French newspaper La Tribune has reported this.